skip to main | skip to sidebar

The Wild Boys of London; or, the Children of the Night 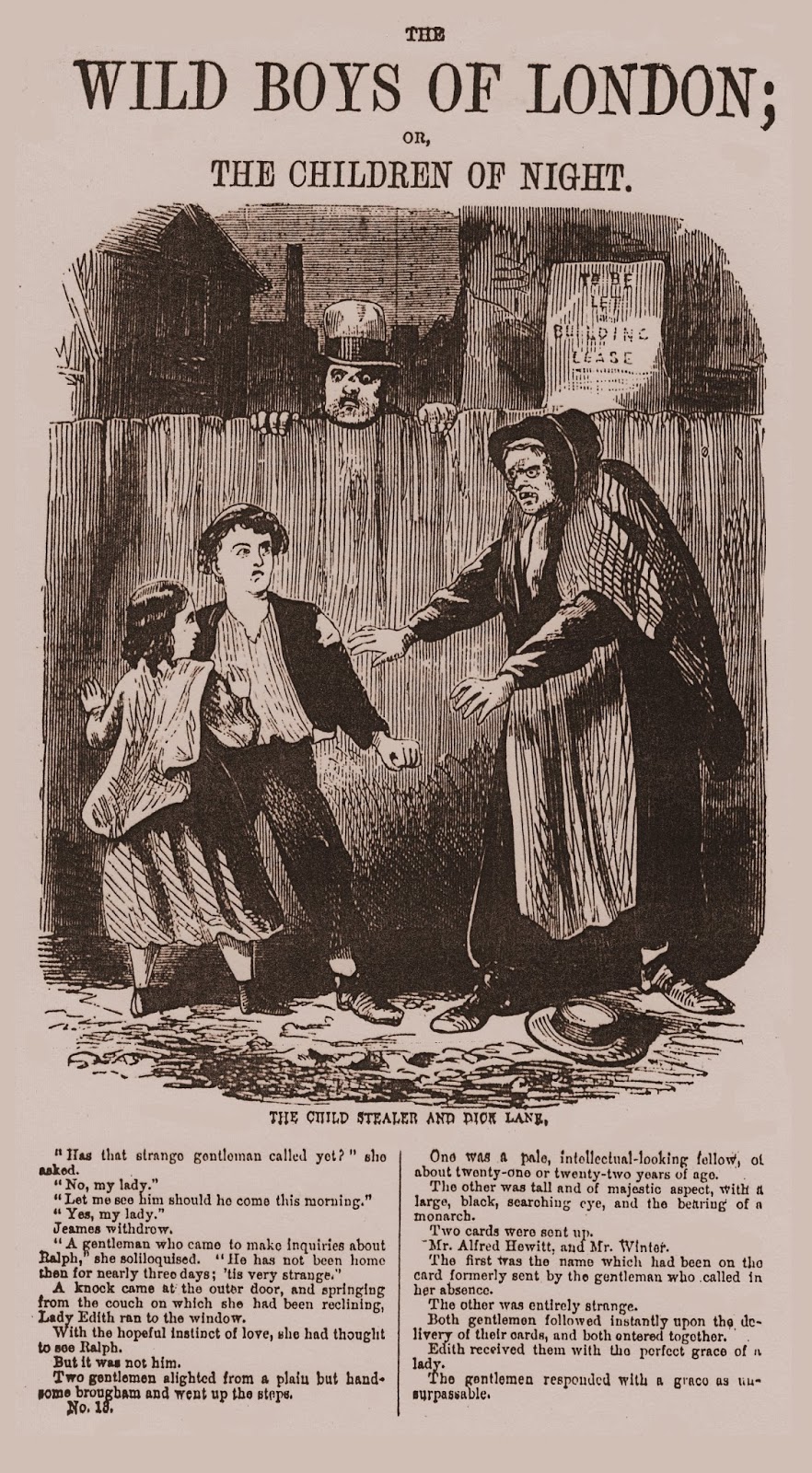 The first edition of “The Wild Boys of London” was completed in 1866 and bears that date on the title. Book I contains 44 Nos. of 8 pp. each and book II contained 59 Nos., making 103 in all. If your imperfect copy is numbered 1 to 74 consecutively, it is certain that it is the second issue, and the story was that it came to an end suddenly, copies being seized by the police. The second issue was somewhere about 1872. The authorship of the work is unknown. There were no gifts with the first issue.There is no certainty as to the authorship of any of the things which you mention, but G. A. Sala was not the writer of “Charley Wag.” Probably it may have been by C. H. Ross. It was published by H. Lea.

Yours Faithfully A. E. Waite.
For Frank Jay.”

Occultist Arthur Edward Waite was born in Brooklyn, New York, on 2 October 1857 to an American sailor and an English woman. He moved to London when he was two and soon picked up the penny dreadful habit. Jay said Arthur Waite “possesses the finest collection of this class of literature (penny dreadfuls) in the United Kingdom.” Waite’s complete collection was sold circa 1919 to Mr. John Jeffery, a bookseller and his first edition of The Wild Boys of London (NPC as opposed to Farrah’s truncated version) is probably in a private collection.

The Wild Boys of London; or, the Children of the Night, published by the Newsagents Publishing Company is probably the most famous of all penny dreadfuls even though few people have actually read the work. The penny dreadful may well have been the genesis of William Burroughs Wild Boys characters in books with titles like “Naked Lunch,” “The Nova Express,” and “The Ticket That Exploded.”

Burroughs told author Robert Palmer (Rolling Stone 108, May 11, 1972)  - “in the wild boys I was really deliberately returning to older styles of writing - quite a bit of it is really 19th century”  Burroughs works were an extension of the long tradition of criminal literature that began in the early 19th Century, and he was keenly aware that there was a tradition, that it was still extant in the 20th Century, and that Beat literature (Junkie) was a part of that tradition.

The Ono copy of Wild Boys lacks a title-page but is definitely the edition stopped by the police on issuance of the 74th number, as reported in The Times on December 13, 1877 (p.11). I have a copy of this police-report and it is amusing to read that one news-dealer, (the case was against the retailers not the publishers, a summons was still pending against the proprietor and publisher) a Mr. Wells, 76 years old “indignantly refused to have the books destroyed on the grounds that he was not going to be treated as a child; that worse books were sold every day; and that he was a respectable man, which Mr. Flowers said he could not be if he sold indecent books.” 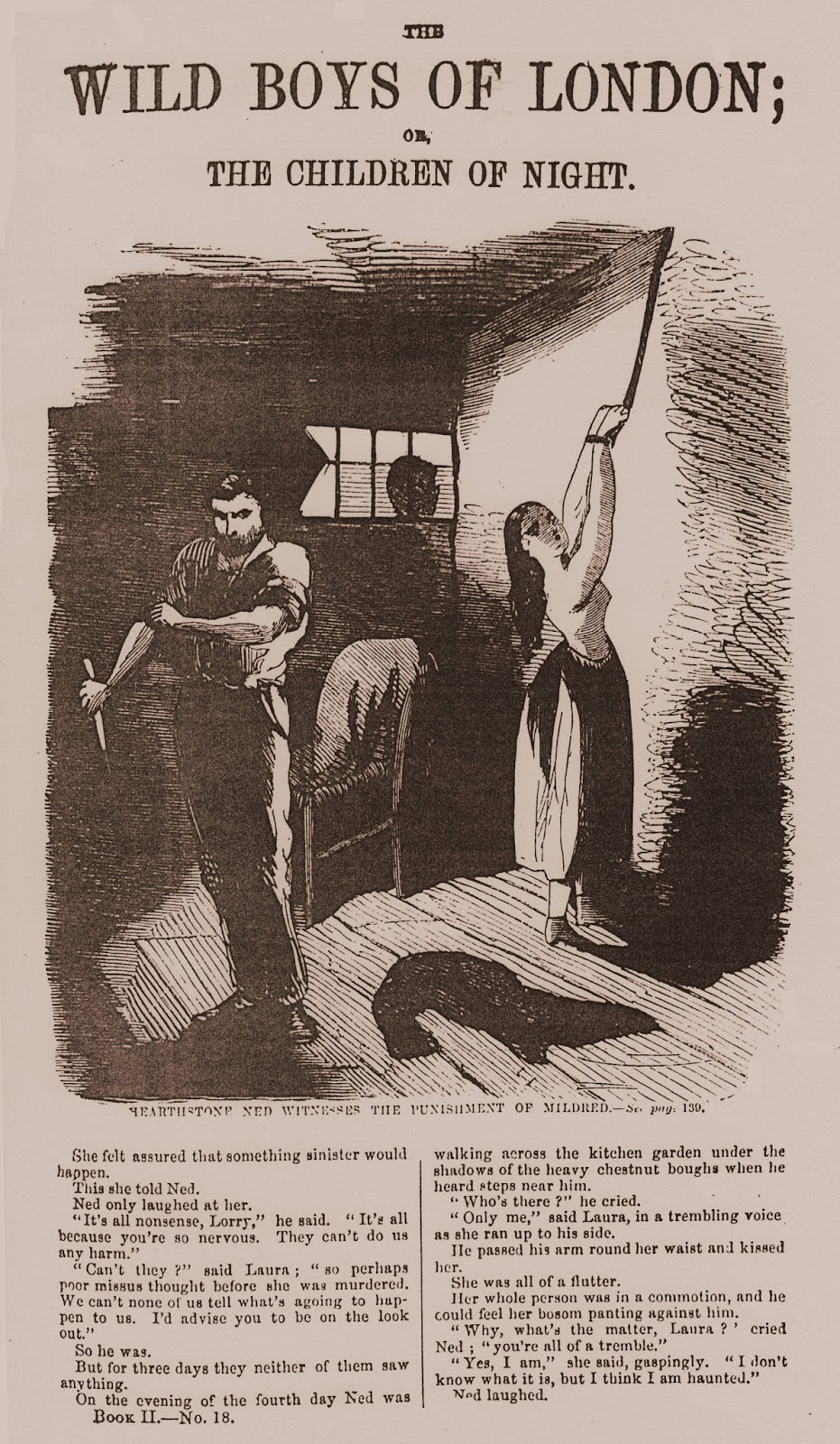 Why the serial was considered indecent is a puzzle. There is some nudity and a scene of flagellation, but such things were common to almost all penny dreadfuls. True the boys are petty criminals, they live off their wits after all, but they are also decent, engaging high-spirited lads with a moral code of their own. They are always ready to help a waif escape from child-stealers or rescue a woman from drowning in the Thames. The real villain here is Mat the Mongrel, who leads Dick Lane's mechanic father astray, first by getting him to join a union, and then when the decent employer is struck, the Mongrel daily leads Dicks father to a life of drunkenness and wife-beating that leads young Dick to wander the streets where he meets the Wild Boys and joins their underground sewer world. The sewers are surprisingly clean in this work compared to the sewers in the books of Edward Ellis (Charles Henry Ross.)

The first boy Dick meets, while passing the doorway of the Victoria Theatre is the Dolphin, a happy dodger with a fondness for penny dreadfuls and melodrama with whom he is already acquainted :

"I am," said the Dolphin, with a laugh, "It's fine. there's Hicks doing the surgeon of Paris; he's got spurs, and such a sword. Pitt's being carried about in a coffin; and Charley Rice was sitting on a post, watching a monkey coming out of chapel."

Hicks was Newton Tree Hicks, an actor in bloody highwayman melodramas at the Victoria Theatre. Charles Rice played in farce and melodrama (including a stint as Blueskin) in the same theatre during 1854-55. In 1863 he was a comedian at the Drury Lane Theatre. Curiously there was a London Romance Company/NPC title of 1864 titled Rose Mortimer; or, The Ballet-Girl's Revenge Being the Romance and Reality of a Pretty Actress's Life Behind the Scenes and Before the Curtain By a Comedian of the T. R. Drury Lane. 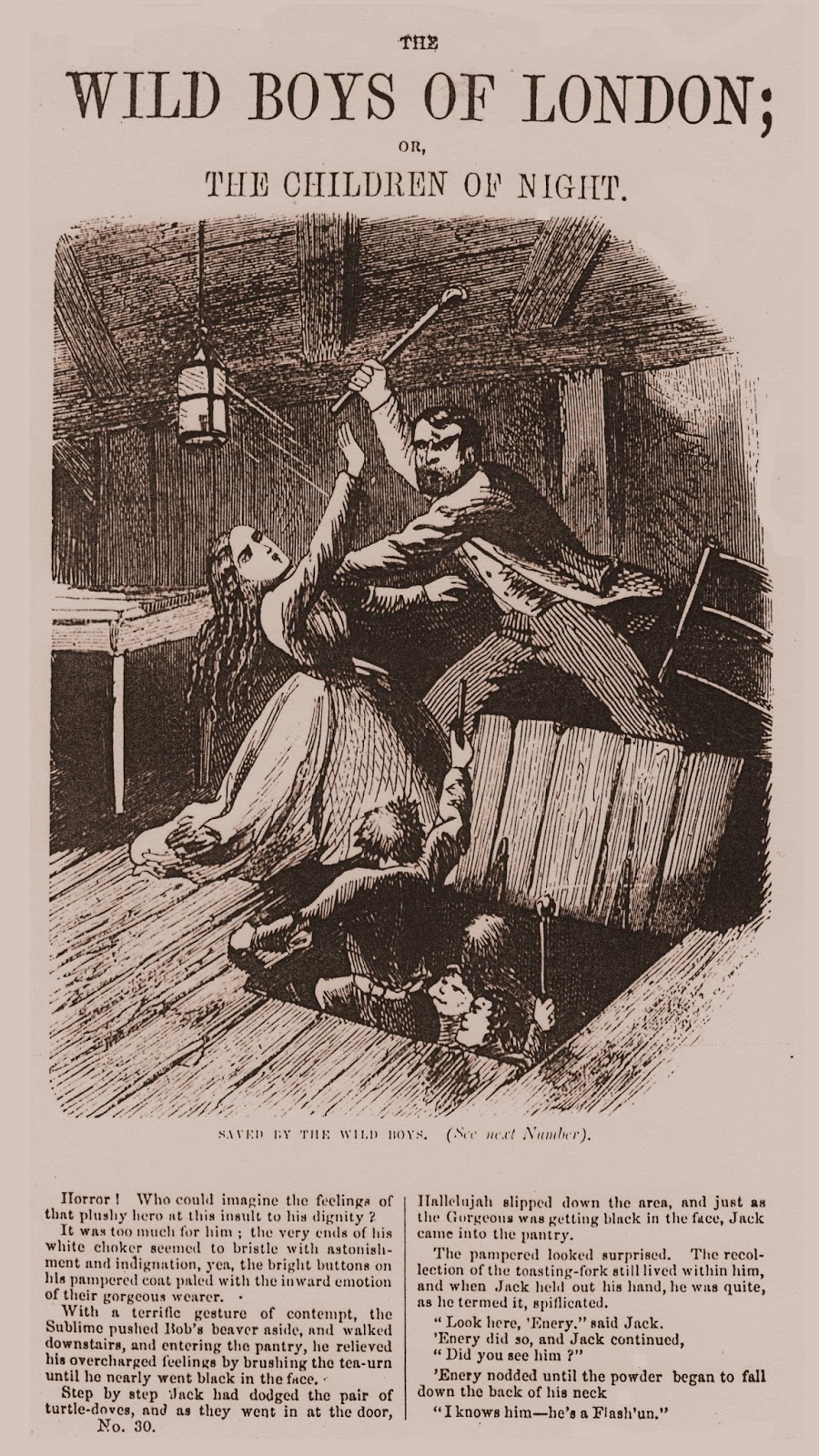 One peculiarity of the Wild Boys author is his clumsy use of backward sentences such as ;

“The boys, with their wild faces and tattered garments, their bare feet and soiled hands; and, above all, that characteristic keenness of eye, which is peculiar to the London street boy alone.”

“They being, just then, in the act of moving forward, were, as a matter of course, tripped up and went full length on their faces.” 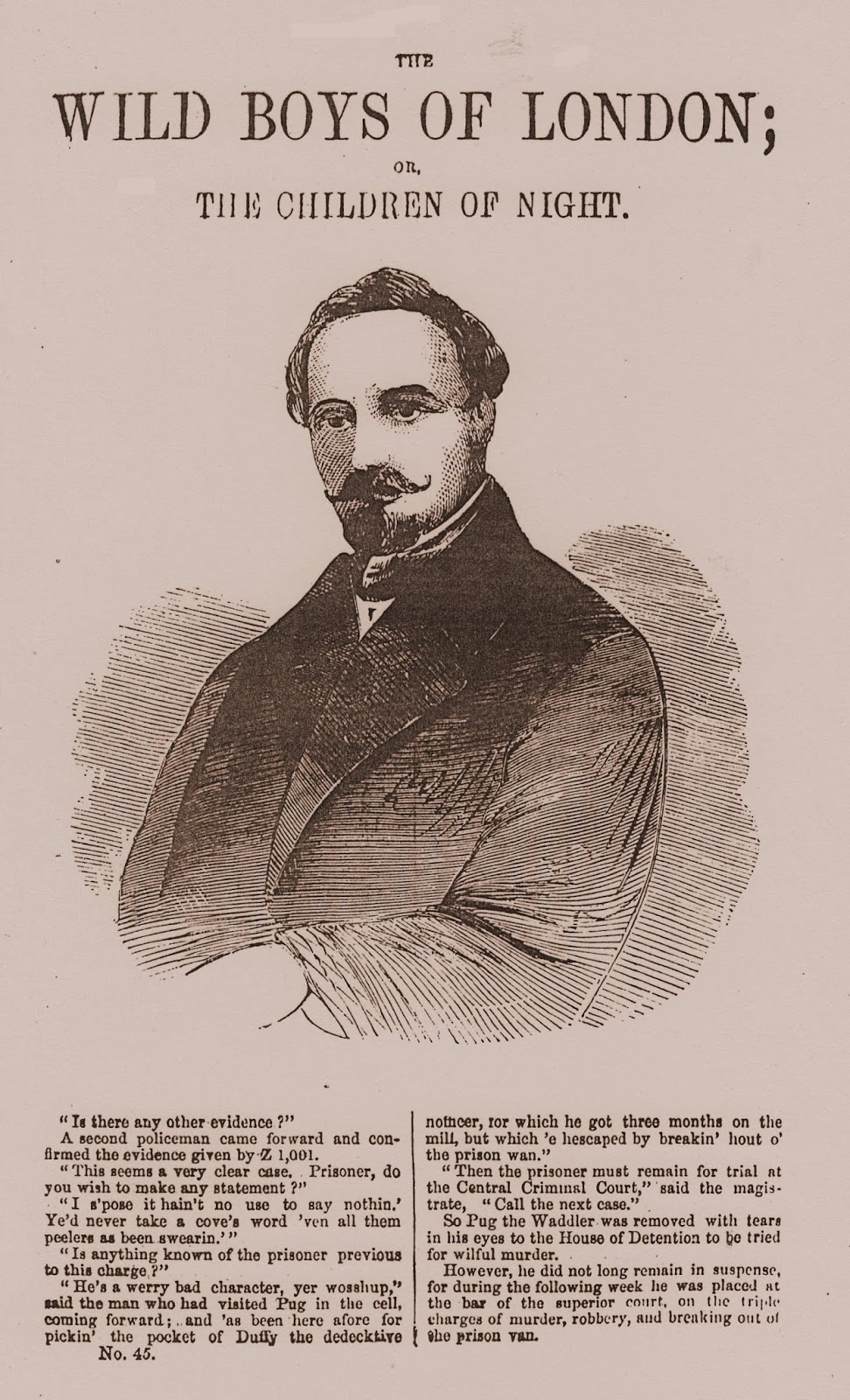 Amongst the illustrations for Wild Boys of London is an oddity, a serious portrait of ... someone. Artist Harry Maguire drew in two styles, serious and humorous, often in the same serial. This portrait is interesting though, could it be F. Farrah, the publisher, (mentioned in the gutter text) NPC manager Edwin Brett or perhaps even the author ? Portraits of characters were not unknown in dreads but this one bears no caption and as illustrated numbers were posted in shop-windows to entice customers it’s difficult to find a selling point to this piece.

Waite was correct about Charles Henry Ross authorship of Charley Wag but hazards no guess as to who wrote The Wild Boys of London. The Bookseller (1868) noted the following names in connection with the NPC, Vane St. John, Bracebridge Hemyng, J. Redding Ware, Charles Stevens, W. Thompson Townsend, and John Cecil Stagg, all of who went directly to work on the fledgling Boys of England story paper when the NPC ceased publishing circa 1866-67. 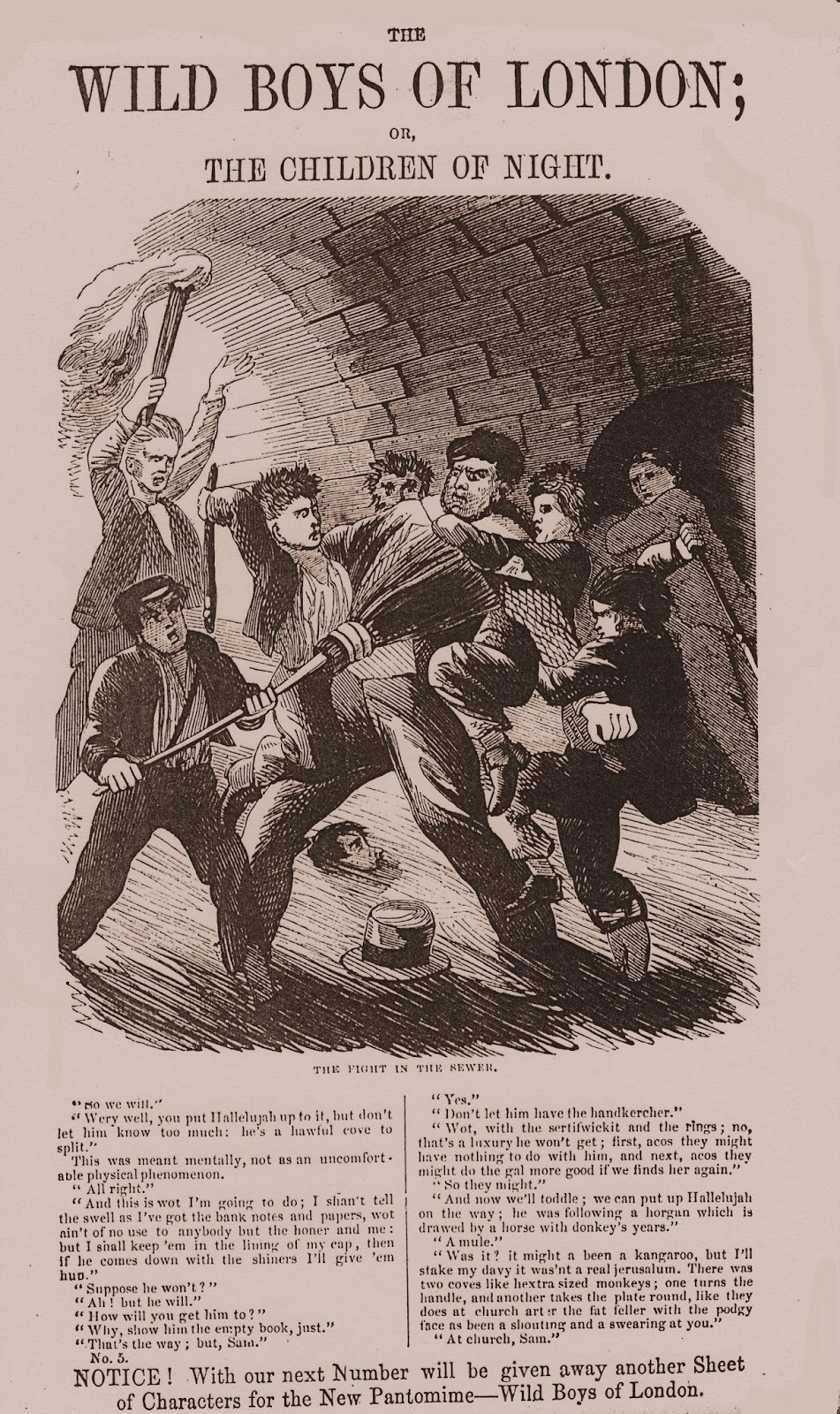 With a list of suspects and plenty of text to compare it was surprisingly easy to identify the author of Wild Boys. I have compared texts from Who shall be Leader? by Vane St. John, Chevy Chase; or, the Battle on the Border, by John Cecil Stagg, and Giles Evergreen; or, Fresh from the Country, by W. T. Townsend, as well as works by Hemyng and Stevens. I checked serials in Reynolds’s Miscellany and Sons of Brittania. My conclusion is that the author of The Wild Boys of London; or, the Children of the Night, was Vane Ireton Shaftsbury St. John, born in Edmonton, London, August 19, 1838. 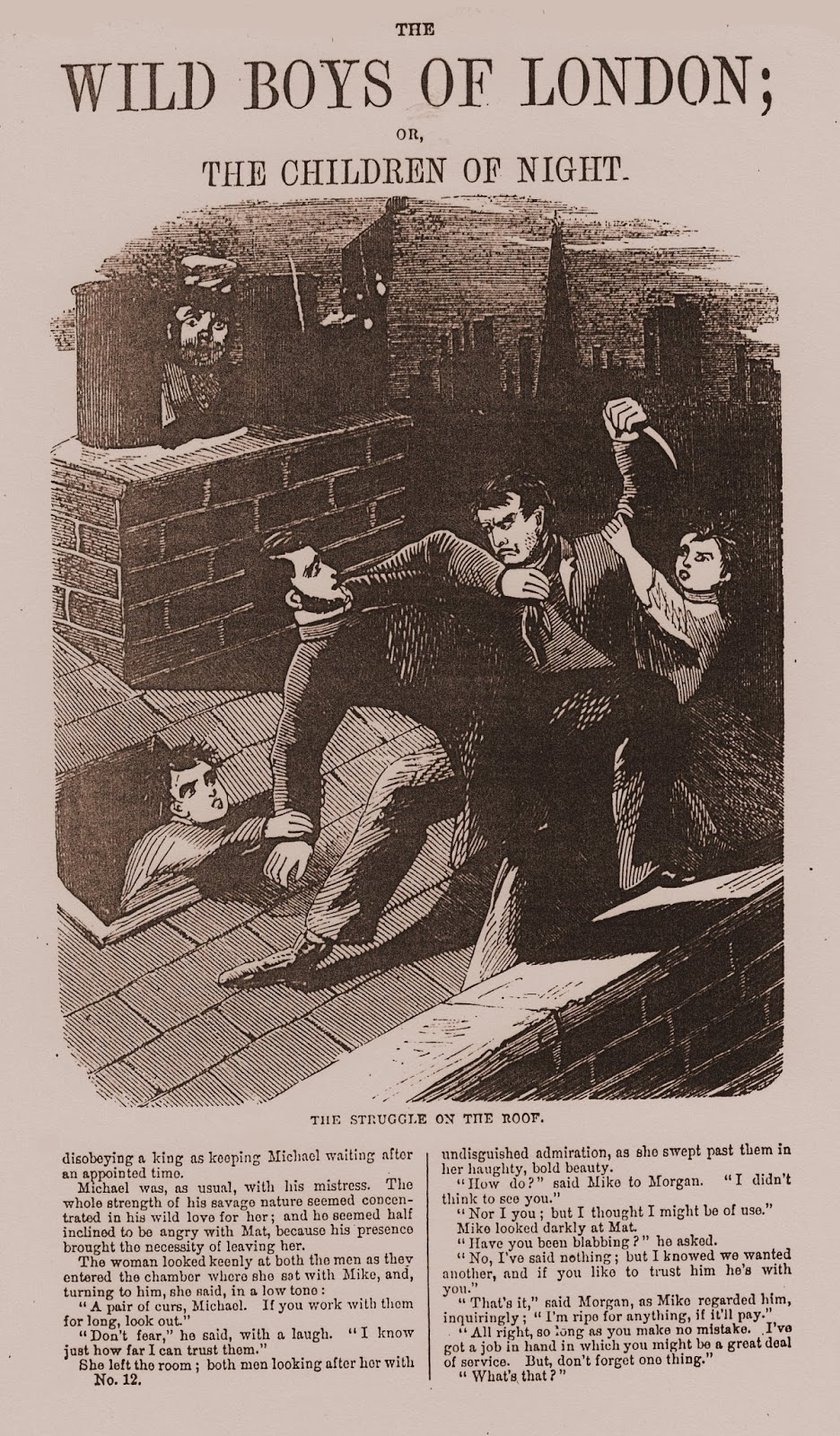 Vane Ireton St. John worked as an Inland Revenue clerk from 1858 until at least 1867 while moonlighting as an author. Percy B. and Vane Ireton joined hands to produce a weekly story paper, The Parlour Journal, which began with a Christmas number illustrated by “Phiz” (1859) and ended on 30 Aug 1862. The Parlour Journal was published at 184 Fleet Street by Edward Harrison and others. Vane Ireton was insolvent in 1861, living at Charles Street, Hampstead Road. In January 1866 St. John, described as an author and bookseller, declared bankruptcy. His address was Arnold Villas, Ode-sa Road, Forest Gate, formerly, Lamb’s Conduit Street. 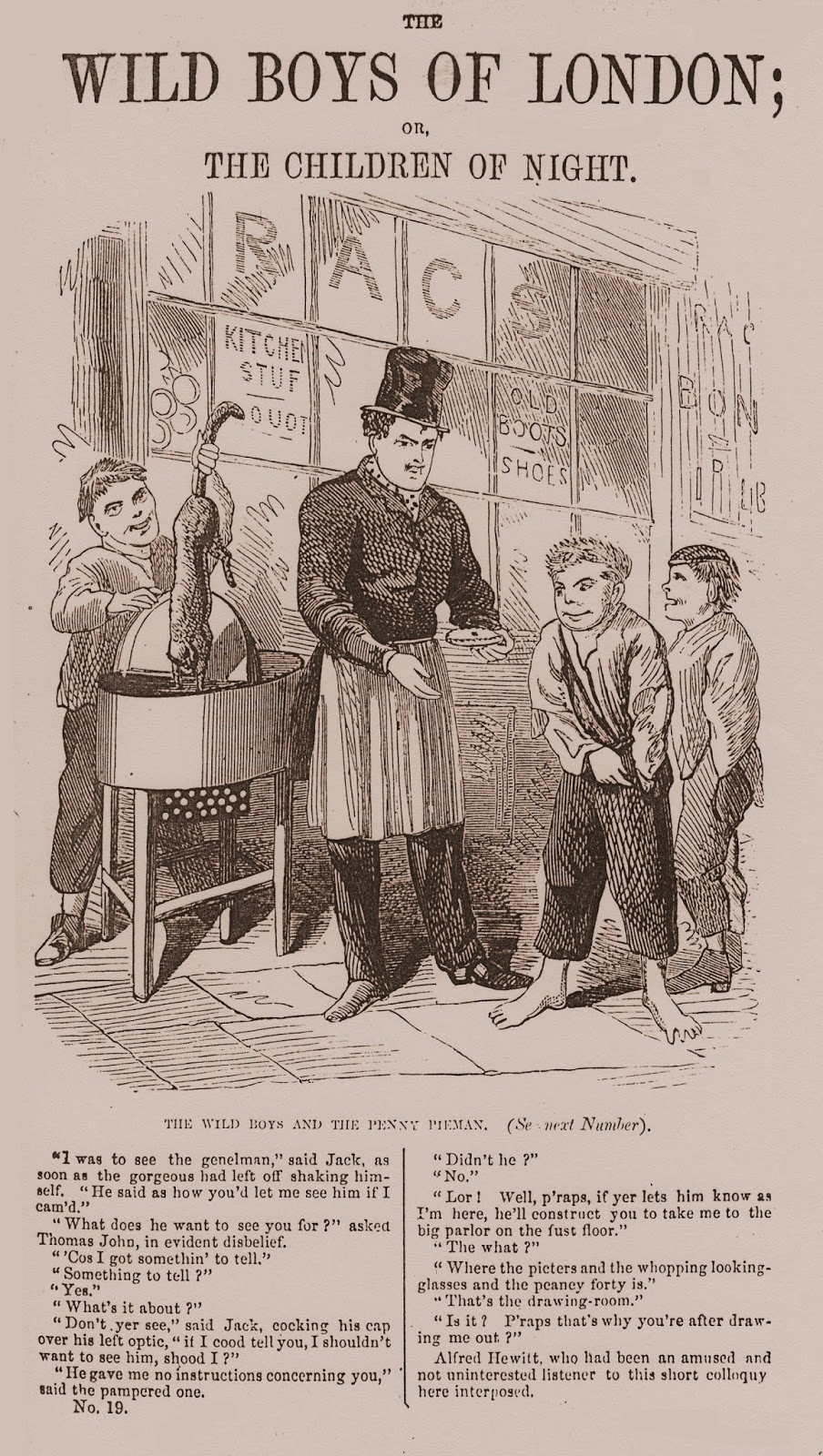 This prolific and alcoholic author had 27 children between 1858 and the 1890’s. Vane St. John was author of three 3 volume sensation novels: St. Eustace; or, the hundred-and-one; a novel, 1857, Undercurrents; a novel of our day, 1860, and The Chain of Destiny; a novel, 1862. St. Eustace was published by T. Cautley Newby. His serials appeared in the Parlour Journal, Reynolds’s Miscellany, The London Reader, The Young Englishman, Sons of Brittania, Boys of England, Boys World and Twice a Week. Vane Ireton St. John died at Peckham Rye “in poor circumstances,” on 20 Dec 1911. He was married twice and had seventeen children. (DNB)

Compare this style of writing , from The Young Bushranger, in Sons of Brittania Vol.IX, no. 216, by Vane St. John, to the quotes from Wild Boys above;

“Revolvers they all had, but no powder….”

“He made a peculiar sign to the blacks, and then, raising his knife, he brought it down with one sharp, sure, swift blow, that buried it up to the hilt in the victim’s breast, while with his disengaged hand he seized the throat of the unfortunate man to prevent his crying out, and giving the alarm.”

From Who Shall be Leader ? The Story of Two Boys’ Lives, “Boys of England” Office, by Vane St. John ;

“Heavily down upon the thatch of a little cottage, on the margin of Royston Heath, came the flakes of the falling snow.”

Next, and last (I could go on forever) ;

“He handed him, as he spoke, a huge jug of beer, of which, the wayfarer, with a glad heart, partook, holding still, as he drank, the bundle beneath his cloak, but so that the warmth of the fire could reach it.” 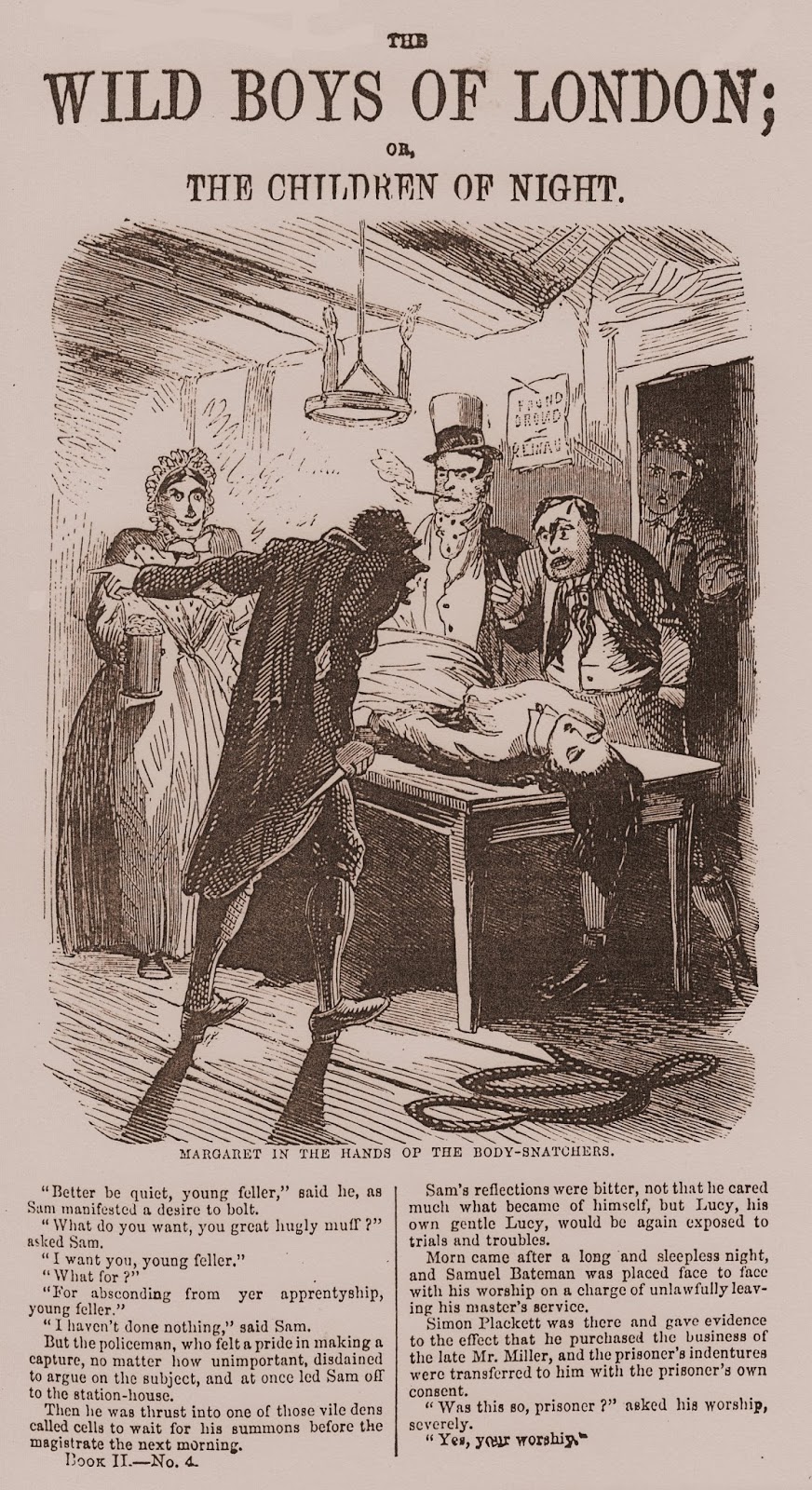 Comparing text from titles by Stagg, Stevens, Hemyng, and Townsend (Ware was the only author I have no works to compare with NPC titles) I find none of those “A-hah!’ moments of recognition that I find over and over again in comparing Wild Boys of London to known works of Vane St. John. Further comparison leads to some more tentative attributions of classic penny dreadful titles to V. St. John, to wit; The Boy Detective; or, the Crimes of London ; The Wild Boys of Paris; or, the Mysteries of the Vault of Death, and The Dance of Death; or, the Hangman’s Plot.

Vane Ireton St. John might have been the principal writer on The Boy Detective but halfway through the book there is a change of writers. At this period (1866) St. John (if it really was him) was churning out 8 pages weekly on The Wild Boys of London in addition to Boy Detective. This was not unusual because prolific authors such as C. H. Ross and James Malcolm Rymer often worked on up to 10 different weekly serials at a time. 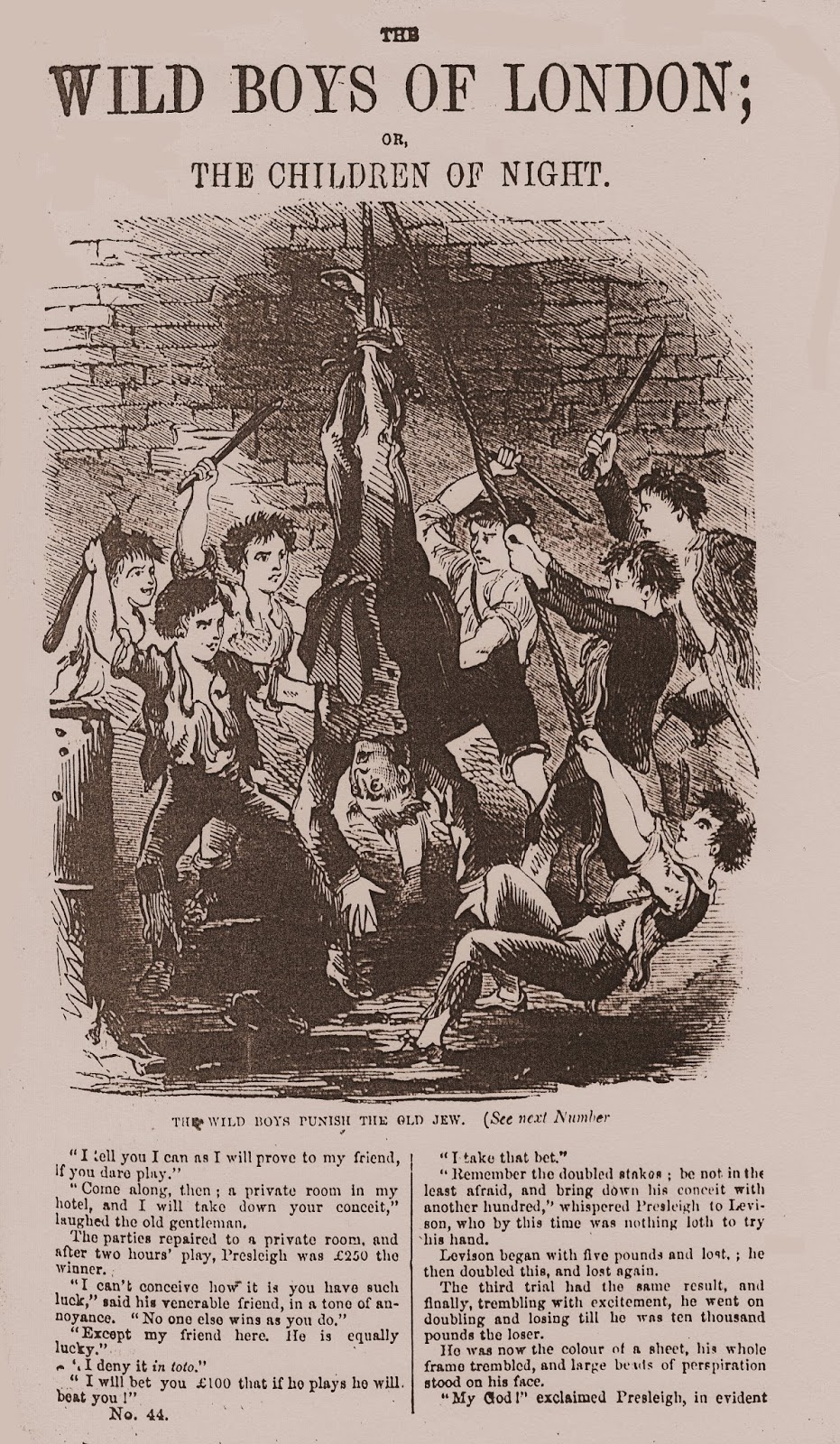 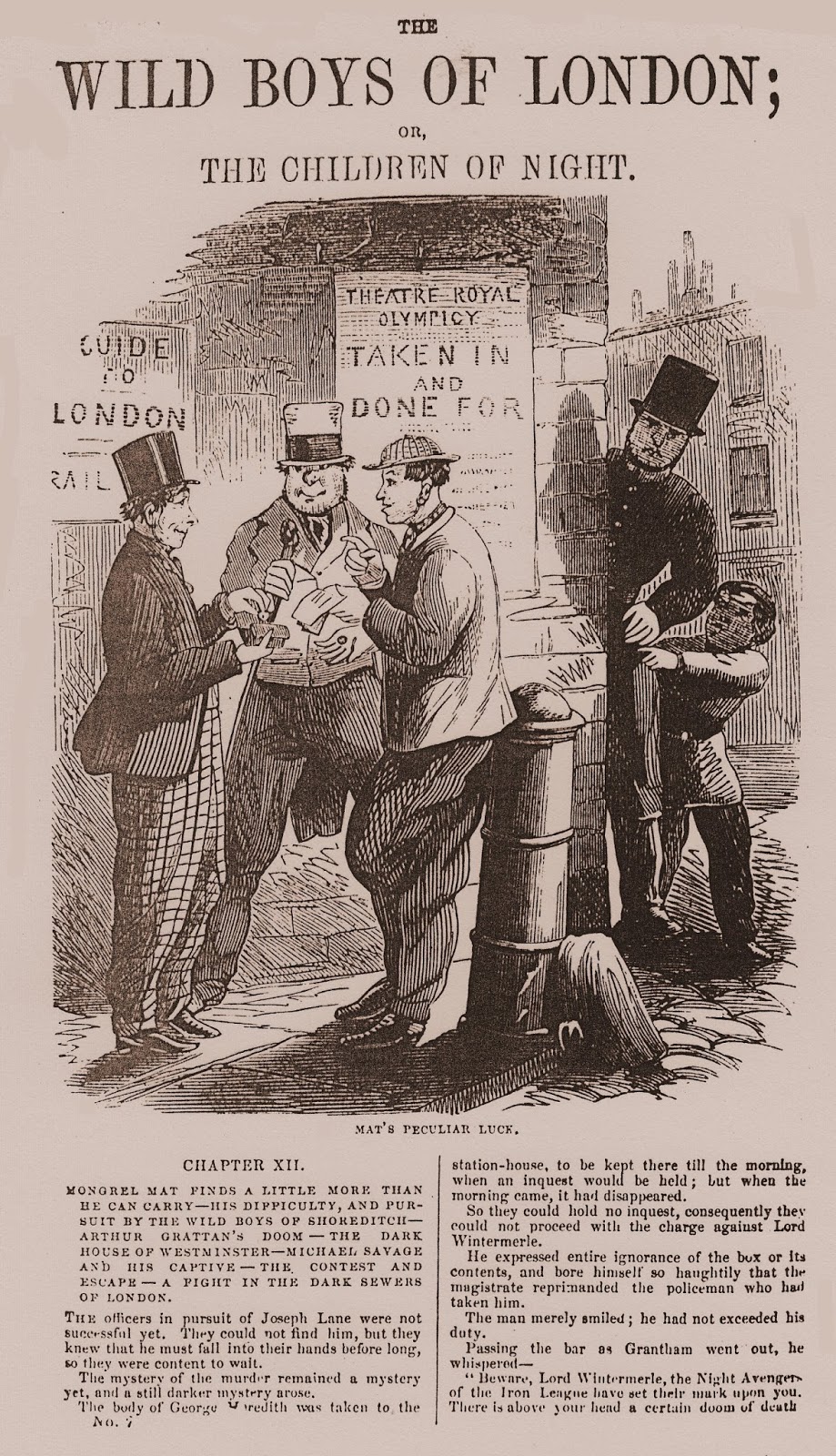 The last page had the following Special Notice:
A New Tale, of startling and thrilling interest, called,
IVAN THE TERRIBLE;
OR,
DARK DEEDS OF NIGHT!
Will be published on Tuesday December 5.
With No. 3 of this work will be published and given away (Gratis) an Illustrated Story entitled,
THE GHOST’S HOUSE IN THE LONELY ROAD!

Posted by john adcock at 10:10 AM
Labels: Wild Boys of London

If you're interested in Vane Ireton Shaftesbury St John, you may also be interested in my novella-ette, 'The Time Traveller, Smith', which makes some mention of the great man:

Are there any pictures of Vane in existence?

He is my great grandfather.

There are no photos of Vane St. John that I know of but some may have come down to his descendants.

I am the great grand daughter of Vane's son Clarence, a legitimate son. Any picture of him would be interesting to see. The St John men are very distinctive in looks as I have pictures of James and Spencer.

john adcock
Cartoonist, illustrator, storyteller, born in Nelson, B.C. in May 1950, has contributed to Chronicle, Weirdom, and Visions fanzines. John illustrated ‘Ronald and the Dragon’ by Lawrie Peters in 1975.